Every time someone sends some pics of their light boxes or the project they’ve been working on, I always think “geez I don’t think anyone will be able to top this”. Then, invariably, someone sends in a more badass project. Check out Mike’s project with write-up below:

“I made this five panel light box to decorate our basement game area. I’m not sure my kids appreciate the retro-ness of it yet, but I’ll keep working on them. My wife and I choose the particular five marquees because we have a fondness for those games and also because these all have their own creative designs and were more than fancied up words (ex Star trek or Defender). Crazy Climber has slightly different proportions than the others which resulted in the black side strips, but that is just about my favorite game when I was a kid, so it had to be here.

The inside is illuminated by five volt LEDs (led strip that has a usb connector) powered by a USB brick. The brick needed to have a mechanical switch which I connected to in order to have a switch on the outside of the cabinet. This switch has three positions,: illuminated, off and charging. This involved opening up the brick and soldering new connections to it. A touch switch wouldn’t work for me unless it could be made accessible to the outside but I was worried that would weaken the frame. I don’t know the run time until it goes dead, but it is long enough to last an evening and I expect quite a bit longer (the brick is rated at 12000mAh at 5volts. I can attach a recharger to a nearby outlet. I could also just plug it in, but I really don’t like cords showing. The LEDs are arranged around the edges of the entire box and also along each dividing strip and adhered to the back interior of the cabinet facing the front. Flickering was a problem towards the end of the initial single led run so I had to split it into two runs with a second power feed which solved the issue. For good measure I also applied plastic adhesive mirror panels on the interior back. Cabinet depth is 2 ½ inches. I used 1×3’s for the perimeter, and ripped the same 1×3 so they had a depth of 1” for the center strips. A table saw was used to cut the slots to hold the glass. I got the glass at Lowe’s, as they would cut it for free. All the wood pieces that are showing are attached to each other with various metal angle irons. The back is screwed on. It is fairly heavy, but it hangs fine on a cleat.”
-Mike 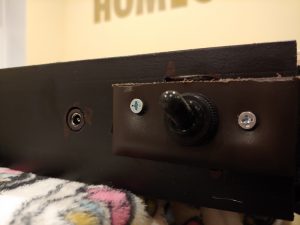 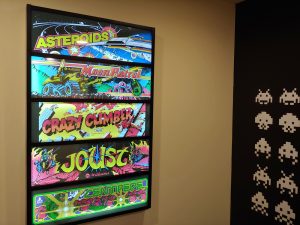 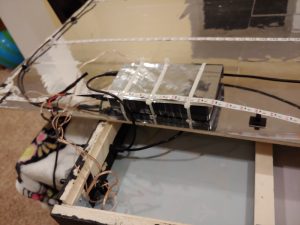